Rock mulch or bark mulch? Which is best for you?

Understanding the differences between these two materials will greatly improve the quality of the landscape.

When doing any type of landscaping design, it is important to consider the materials you will be using. There are two materials that are commonly misused, which are landscaping rocks and landscaping mulch. 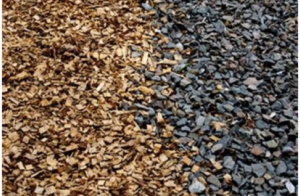 Bark mulch is often used by landscaping services because it is very cost effective. Bark mulch is also lightweight and easy to apply. It is commonly used as a weed barrier around homes and within gardens as well. It repels weeds and also holds moisture so you don’t have to water plants as often.

Additionally, it is commonly used in gardens because it breaks down in soil rather quickly. As the bark mulch breaks down, it will also add organic matter to the soil.

There are several reasons why bark mulch may not be the most ideal for a particular landscaping design. The first reason is that it decomposes rather quickly, and although the decomposing material adds nutrients to the soil, it needs to be replaced every few years.

Another reason that it isn’t always chosen for a particular design, is because the bark fades after exposure to sunlight, and the newly added bark mulch may be a different color. Last, being lightweight causes the bark mulch to blow away, and can get washed away during heavy downpours.

Landscaping services use rock mulch as a long-term type of landscape. Since it is heavier and doesn’t decompose as quick as bark mulch, it will last longer in the area that it is placed. Rock mulch is generally more expensive, depending on the size and type of rock.

The size can range from rocks that are pea-sized, all the way up to golf ball sized. It is also used because there are many different colors of rock mulch. The variety of colors allows the landscaping design to have more options.

On the other hand, rock mulch is not ideal for certain types of landscapes as well. In areas where there is a lot of trees that will shed their leaves, it is not ideal. The leaves will cover the rocks and they will be difficult to remove.

Next, if a weed barrier isn’t installed underneath the layer of rock mulch, weeds can quite easily grow. Last, rock mulch is difficult to move and rearrange once installed. This can make rearranging plants within a landscape pretty difficult.

Overall, landscaping rocks and landscaping mulch both have situations in which they are better for use. Consider your budget, location, surrounding environment, and types of plants within your landscape before deciding which to use.